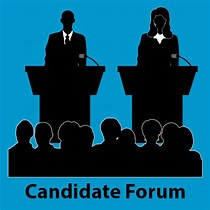 Candidate Forum Not Held this Year

While the Neighborhood Council of St. Augustine’s City Commission Candidate Forum has always been an important part of the campaign season, it was decided that with 2 of the 3 City Commission races decided in the Primary on August 29, that there would not be the audience turnout for a single race between only two candidates.   As many of you know Mayor Shaver won re-election and John Valdes won Seat 4, both by receiving more that 50% of the vote in the Primary.

Since there were only two candidates for Seat 5 of the City Commission, Incumbent Nancy Sikes Kline and Chris Ellis did not have to run in the Primary. Therefore they will be on the General Election ballot.

To ask these two candidates questions you may have, here is their contact information to call or email them.

The General Election takes place on Tuesday, November 6, with registration books closing October 9.   Early voting will be from October 23 – 30.