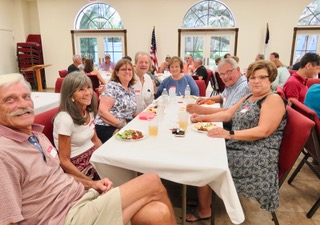 We had a great turnout for the Nelmar Terrace Neighborhood Association Annual Fall Meeting & Potluck dinner on Sunday, October 7 from 4 -6 pm. It was held, as always, in the Fellowship Hall of Christ of Savior Evangelical Lutheran Church at 21 Milton Street. The neighborhood was well represented with a cross section of neighbors from all over Nelmar Terrace. Over 45 people showed up bringing a delicious assortment of food, which was enjoyed by all. NTNA (Nelmar Terrace Neighborhood Association) provided drinks and the paper goods, and Cliff Skarr from the church was there to help host the event.

Nelmar President Melinda Rakoncay opened the meeting at 5:15 pm while people enjoyed their dessert. Reuben Franklin, Mobility Director of the City of St Augustine, was unable to attend but updated Ms. Rakoncay with the latest news on the May/San Marco intersection, which has fallen behind schedule. It now looks like it will not be ready until Spring of 2019. After the intersection is completed, FDOT will begin construction on the drainage project to eliminate the flooding problem on May Street.

With no new nominations to serve on the Nelmar Board, the present Board agreed to continue to serve. Steve Alexander made a motion to put forth Melinda Rakoncay as President, Matt Shaffer as Vice President, Irene Arriola as Secretary, Jeanette Booth as Treasurer, and Manfred Nelles as Sargent of Arms. After a second of the motion, the slate was voted in unanimously.

Guest speaker, Commander Jennifer Michaux of the St Augustine Police Department was glad to report that crime in St. Augustine was down and that no major incidents were reported in Nelmar Terrace for the past year. She reminded everyone to keep doors locked, especially those of vehicles, and not to leave bikes or other valuables unattended outdoors.

The Christmas Party was set for early December, with a date to be determined later. Jeanette and Robert Booth graciously offered to host it again this year in their home. All dues paid members would be given an updated 2019 Nelmar Terrace Directory at the party.

Jeanette Booth collected $10 annual dues from many of the neighbors, and the meeting was adjourned at 6 pm.