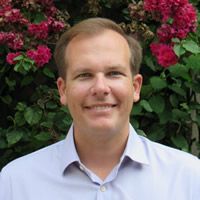 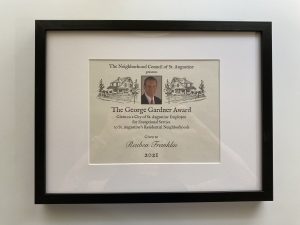 The Neighborhood Council of St. Augustine is happy to announce the creation of The George Gardner Award to honor the love George had for both the City of St Augustine and its residential neighborhoods.

Almost twenty years later, the Neighborhood Council of St. Augustine has grown to 10 Neighborhood Associations and still operates under Mayor Gardner’s original vision, which was to act as a bridge between City government and its residential neighborhoods.

On September 13, 2021 at 5:00 pm in the Alcazar Room at the City Commission Meeting the first recipient of this award, Reuben Franklin was honored.  George Gardner’s widow, Sally, was there to help present the Award.

Reuben Franklin has been chosen as the first recipient because of his dedication in 2017, when he first took the newly created post of Mobility Director.  While planning a big long term plan for mobility was his assignment, Reuben realized that there were many simple mobility problems throughout the various neighborhoods that could be fixed quickly and put into the City budget.  He spent many afterwork hours in evenings and weekends meeting and walking the neighborhood streets, listening to residents and their needs.  All of this done while his wife, Amy was pregnant with their first child, and he often had to preface meetings that he might have to drop everything to take his wife to the hospital.  He followed through and made sure issues were addressed, some as simple as yellow curbing to designate no parking areas, to putting sidewalks into City budgets.  He always was willing to pick up the phone at any time of day, to listen to a residents complaint or request.

Although he has moved on to become Director of Public Works, the neighborhoods have not forgotten his early days, when he took much of his personal time to listen and take care of their concerns.  This kind of close working relationship between the City and its neighborhoods is something George Gardner always wanted to see.

Reuben’s wife, Amy, was also there for the ceremony and was thanked for allowing Reuben to spend so much time in the neighborhoods during her first pregnancy.  Upon receiving the award, Reuben said, “I’m truly humbled to be selected as the first recipient of this award.  I  love the city and care about the residents.  In doing my job every day, it is my honor to carry on the vision of Mayor Gardner.”  Mr. Franklin was moved when Sally Gardner told him that George would be delighted that he was chosen as the first recipient.

The Neighborhood Council of St. Augustine hopes this Award will continue to inspire a close two-way relationship between the Residents and City Employees by working together to make St Augustine a wonderful place to live.